Money Advice Service will soon become MoneyHelper, the easy way to get free help for your money and pensions.

Press release: “Protecting” children from money issues can have negative impact on finances in adulthood

New research by the Money Advice Service shows that talking to children about money and giving them experience of making money decisions could be as important as saving for their future.

Parents should include their children in discussions about money from age four to give them the best chance of being financially secure in later life, it has emerged.

Findings from a report released today by the government-backed Money Advice Service, demonstrate a worrying lack of money skills among the UK’s children and young people. Millions of Britain’s young people are set to enter adulthood unprepared to handle their money and at increased risk of being plunged into life-changing debt.

The survey found that children whose parents involved them in decisions and discussions about money and allowed them to experience using money from as young as four, are more likely to develop vital financial skills. These skills can have a major positive impact on their ability to save, budget and plan ahead financially in later life. However, children who aren’t included in these discussions, or don’t experience using money, risk being left behind.

“We know that parents might feel as though they’re protecting their children by not talking to them about money, yet helping children to understand how to save and handle money is one of the most important things parents can do to ensure their long-term financial security,” said Kirsty Bowman-Vaughan, Children & Young People Expert at the Money Advice Service. “The best ways to do this are through discussions, and allowing them to experience money and make decisions. That means talking to your children about money matters and letting them decide for themselves, in an appropriate way, how to spend money. Parents shouldn’t be afraid of starting to do this from an early age – that’s when it’ll have the most impact.”

Children (aged 12-17) whose parents decide how they spend their money are also nearly five times more likely to say that borrowing money didn’t bother them – even if they had no plans to pay it back (19%, vs. 4% who decide on their own or with their parents).

This group were also more likely to choose unnecessary purchases over essential expenditure. The survey asked children aged four to six to choose between buying a toy and buying lunch. 30% of children whose parents decided how they spent their money chose the toy, compared to 17% where the child decides how they spend their money.

Finally, these children are less likely to be confident in managing their money. Only one in three (35%) whose parents made money decisions for them said they were confident in handling their finances.

Parents have a key role to play in helping their children learn the basics of money management. They are by far the most common point of contact, with 74% of children saying they talk to their parents about money.

The research also showed that parents are keen to be involved with their children’s money management skills. 90% think it’s important to help their child learn about money and 81% think they can impact their child’s ability to manage money in adult life.

Previous research has shown that our attitudes towards money can be set from as young as seven. However, many parents are still leaving it too late to intervene and failing to take decisive action to help their children. The research findings showed that the majority of parents were likely to overestimate the age at which they should talk to their children about money issues including saving, bills and debt (see Table 1 below).

Furthermore, a quarter (24%) thought they should wait until their children were in secondary school before teaching them the importance of saving. A further 31% of parents of 16-17 year olds said they didn’t set and stick to money rules with their teenager. And 17% said they rarely or never spoke to them about the risks of getting into debt.

“There are many ways that parents can start to encourage their children to interact with money from a young age said Kirsty Bowman-Vaughan. “We know that children learn best when they gain practical experience with money, and allowing them to make decisions and learn from their mistakes lays the foundations for better money management skills as they grow up.”

How to include your children in money discussions and decisions:

Table 1: Age parents and carers think they should begin to talk to their children about money 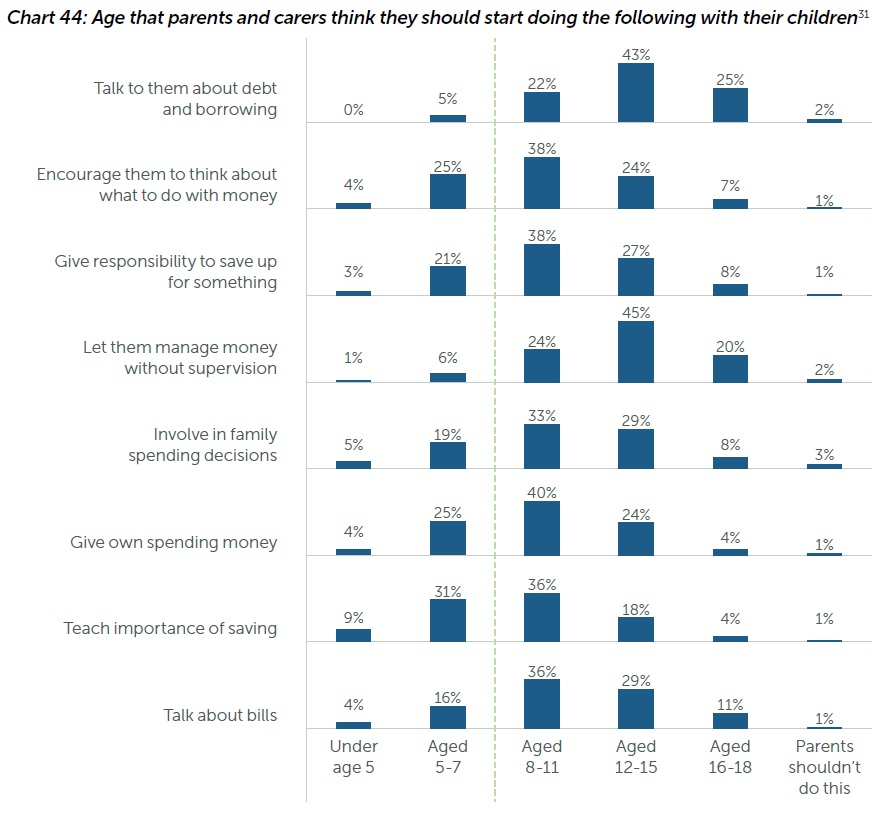 The full report can be downloaded here. Graphs and charts from the report are available as separate image files on request.

About the Money Advice Service

The Money Advice Service is an independent organisation, giving free, unbiased money guidance online at moneyadviceservice.org.uk or via free phone on 0800 138 7777. Debt advice is also provided through a variety of partners across the UK. The Service was set up by Government and is paid for by a statutory levy on the financial services industry, raised through the Financial Conduct Authority. Its statutory objectives are to enhance the understanding and knowledge of members of the public about financial matters (including the UK financial system); and to enhance the ability of members of the public to manage their own financial affairs.

About the Financial Capability Strategy for the UK

The Financial Capability Strategy was established as a ten-year strategy to address the stubbornly low levels of financial capability across the UK. The Strategy aims to bring together individuals and organisations to deliver a collaborative approach to improving levels of financial capability, as well as establishing the interventions that are proven to work and seeing that as many people as possible benefit from them.

Sorry, web chat is only available on internet browsers with JavaScript.

Got a question? Our advisers will point you in the right direction.